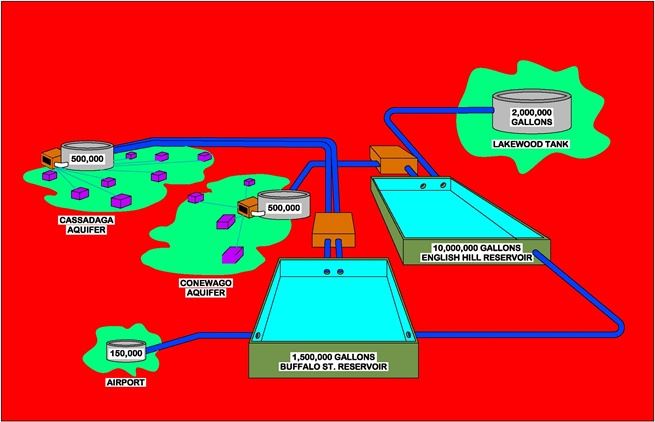 As of 2012, the BPU Water Division serves the City of Jamestown and the Villages of Celoron, Falconer and Lakewood. Portions of the Towns of Busti, Ellicott and North Harmony also receive BPU water.

The Buffalo Street Pump Station is a 1,500,000-gallon reservoir. Water is pumped here from the Cassadaga well field to be distributed to BPU customers. Originally built in 1925 with a cone top, in 1957, the first reservoir was replaced with a flat concrete roof covered with grass. These 200 horsepower booster pumps at the Buffalo Street Pump Station send water from the Cassadaga well field out into the utility's water distribution system.

The Cassadaga Aquifer has a watershed area of 140 square miles. Water is pumped from eight wells and collected in a receiving well at the Cassadaga well field. Just enough chlorine and fluoride are added before the water is pumped to the Buffalo Street Pump Station. Each well head and its equipment is enclosed in a small building such as this one. Two 200 horsepower pumps at the Cassadaga Pump Station propel the water to the Buffalo Street Pump Station, on the first leg of its journey to utility customers.

The Conewango Aquifer has a watershed area of 290 square miles. Water is pumped from the four wells tapping this aquifer to the Clay Pond Pump Station and stored in a 500,000 gallon storage tank. This Pond was once a pit where blue clay was dug for brick making. The story has it, that one day workers returned to the clay pit to find it had filled with water, the Clay Pond. The English Hill reservoir can be filled two ways: by back flow from the distribution system or by direct pumpage from Clay Pond. This refilling is usually done during the night. Two 200 horsepower pumps propel the water to the English Hill Reservoir. All pumps are redundant in case of failure.

The English Hill Reservoir, located at the highest point of the city, consists of two identical 5,000,000-gallon chambers. The first chamber was built in 1912 and 1913 and the second chamber was constructed in 1965 and 1966. One 20 horsepower and two 75 horsepower pumps move water to homes and schools located at this same elevation, while gravity causes the remainder to flow into the distribution system should it be needed.